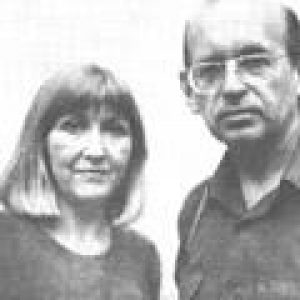 Bernd and Hilla Becher were a partnership of hugely influential German photographers who lived and worked in Düsseldorf. They were preoccupied with the technically rigorous photography of old industrial buildings in a manner akin to industrial archaeology.

Bernhard Becher was born at Siegen and studied graphic art and lettering at the Stuttgart and Düsseldorf Academies. He began making paintings and lithographs of industrial structures such as iron-ore preparation plants and railway stations in 1953, influenced partly by de Chirico. Becher gradually became more interested in the buildings themselves than in the act of painting, and began to collect old photographs of them and from 1956 to photograph them himself, giving up painting altogether 1957. Hilla Becher, born in Berlin, had studied photography in Potsdam and had worked as a photographer in advertising at the time they met. She had decided to give up advertising and start again, and had begun to study at Düsseldorf Academy, where she also taught in the photographic department. They met in 1959. In the same year they began to make systematic series, at first mostly of buildings in the German Ruhr and Holland. Together, the Bechers went out with a large 8 x 10-inch view camera and photographed these buildings from a number of different angles, but always with a straightforward "objective" point of view. They shot only on overcast days, so as to avoid shadows, and early in the morning during the seasons of spring and fall. Objects included barns, water towers, oal tipples, cooling towers, grain elevators, coal bunkers, coke ovens, oil refineries, blast furnaces, gas tanks, storage silos, and warehouses. At each site the Bechers also created overall landscape views of the entire plant, which set the structures in their context and show how they relate to each other.

The Bechers also photographed outside Germany, including from 1965 buildings in Great Britain, France, Belgium and later in the United States. In 1966, they undertook a six-month journey through England and south Wales, taking hundreds of photographs of the coal industry around Liverpool, Manchester, Sheffield, Nottingham and the Rhondda Valley.

In 1976, Bernd Becher started teaching photography at the Kunstakademie Düsseldorf (policy matters prevented Hilla's simultaneous appointment), where he remained on the faculty until 1996. Before him, photography had been excluded from what was largely a school for painters. He taught and influenced students that later bacame huge names in the photography world: Andreas Gursky, Thomas Ruff, Thomas Struth, Candida Höfer, and Elger Esser.

Bernd and Hilla Becher were among the most influential artists of our time. For more than forty years they recorded the heritage of an industrial past. Their systematic photography of functionalist architecture, often organising their pictures in grids, brought them recognition as conceptual artists as well as photographers. As the founders of what has come to be known as the ‘Becher School’ they brought their influence to bear in an unique way on generations of documentary photographers and artists.