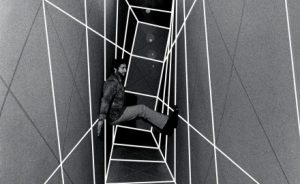 Gianni Colombo (1933 - 1993) was an Italian artist, and an early member of the kinetic art movement.

In the 1960s, Colombo attended Accademia di Brera in Milan, where he met Davide Boriani, Gabriele De Vecchi, Giovanni Anceschi and Grazia Varisco. Together they formed the influential collective "Gruppo T", a group of artists interested in investigating the relationship between images and movement and the participatory element of art through kinetic forms.

Through his work Colombo dealt mainly with the perception of space, creating architectural environments and using mechanics. He was awarded the Grand Prize of the Venice Biennale of 1968.

In 1985 Colombo became director of the Accademia di Brera where he had studied and then taught.