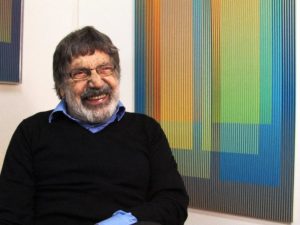 Carlos Cruz-Diez (b.1923) is a Venezuelan artist concerned with colour, light and the implication of movement in his work. He joined many artists from around the world in Paris in 1960, where members of various international movements of kinetic and light art had congregated and would form the beginnings of Op Art.

Influenced by Josef Albers, in 1959 Cruz-Diez began to consider progression, transformation and radiation of colour through constructed surfaces, and he abandoned paint as a medium. His work became divided into four sub-categories of self-defined op art: Physichromies, Chromointerferences, Chromosaturations, and Transchromies. His colour-based experiments are activated by variations of the observer’s position in relation to the work, the light directed at the work, and the relationship between the colours presented.