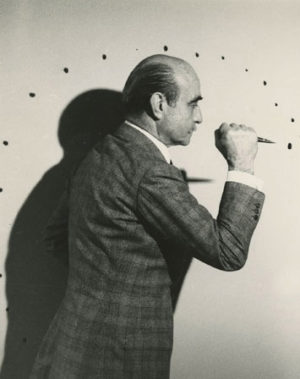 Lucio Fontana was born in 1899 in Argentina to Italian and Argentinian parents. He lived in Milan from 1905 to 1922 before returning to Argentina to work as a sculptor in his father's studio. In 1926, he participated in the first exhibition of Nexus (formed in 1907), a group of young Argentinean artists. From 1928, now back in Milan, Fontana studied at the Accademia di belle arti di Brera.

Fontana had his first solo exhibition in 1930 at the Galleria del Milione, Milan. Traveling to Paris in 1935, he joined the group Abstraction-Création. He developed his skills in ceramics in Albisola, Italy, and later at the Sèvres factory in France. In 1939, he joined the Milanese anti-Fascist artists' group Corrente.

Leaving Europe and the war behind in 1940, Fontana moved to Buenos Aires. He founded the Academia de Altamira in 1946, from which emerged the Manifesto blanco (White manifesto, 1946). He moved back to Europe in 1947 and resumed his ceramic work in Albisola to develop his Concetti spaziali (Spatial concepts, 1949–60) in this medium.

1949 was a turning point in Fontana's career: he created his first series of paintings in which he punctured the canvas with buchi (holes), and soon after began to participate in Italian Art Informel exhibitions. He then explored working with various effects, such as slashing and perforating, in both painting and sculpture. The artist visited New York in 1961 during a show of his work at the Martha Jackson Gallery.

Fontana represented Italy at the 1966 Venice Biennale, and participated significantly at the 1968 Documenta. Fontana died on September 7, 1968, in Comabbio, Italy.