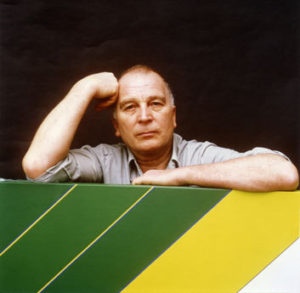 Günter Fruhtrunk was a 20th C painter of Monegasque origin, born in Monaco in 1923. He began his studies at the Technischen Hochschule in Monaco in 1940, although he interrupted his studies to volunteer in many projects. During this period, he made watercolours as a form of distraction from the realities of war. In 1945 he travelled to Neufrach where he studied painting with William Straube, a pupil of Hölzel and Matisse, staying five years.

He opened his first gallery exhibition at the Galerie Der Kunstspiegel in Freiburg in 1947, and during the 1950s he participated in many salon exhibitions and group shows in Paris, including “Peintures et Scultures non figurative en Alemagne d'aujourd'hui” at Cercle Volnay and “50 Jahre abstrakte Malerei” at the Galerie Kreuze.

In 1960 he had a solo show at the Denise René Gallery in Paris, and gained his first attention from America, participating in “Konstruktive abstrakte Malerei von Malevich bis Morgen”, which took place in New York, Chicago, and San Francisco. By 1963 his first institutional show was given by the Museum am Ostwall, and by 1965 he began to undertake public commissions making a large-scale work for the city of Leverkusen, followed by a gigantic mosaic on the four sides of the Auditorium Maximum of the High School for Engineers in Düsseldorf.

In 1970 he was honoured with a solo exhibition at the Musée d'Art Moderne de la Ville de Paris, and later at the Städtische Galerie im Lenbachhaus in Monaco, at the Badischer Kunstverein in Karlsruhe, Museum Bochum and at the Museum Quadrat of Bottrop.

The artist took his own life in his Munich studio on December 12, 1982.