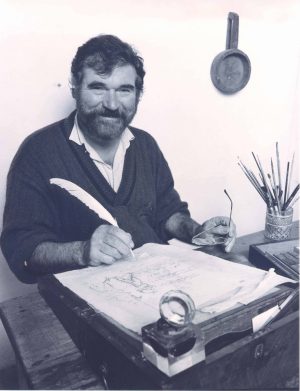 Eric Hebborn was a skilful artist who turned to a lucrative career in forgery at the earliest opportunity. Born into a family of many siblings, he was soon removed into borstal at the tender age of 8 for burning down his school. His talent for painting was spotted by his teachers though, and he made his way, via Chelmsford and Walthamstow art schools, to study at the Royal Academy Schools. He won many prizes at the Academy, including the prized Rome Scholarship in 1959. His two year study at the British School at Rome, where he met senior art world figures such as Sir Anthony Blunt, established the already prodigious talent which he would only ever use to nefarious ends.

Upon his return, he went to work at the studios of art restorer George Aczel in Haunch of Venison Yard. During his employ he was instructed not only to restore paintings, but to alter them and 'improve' them. Aczel graduated him from restoring existing paintings to 'restoring' paintings on entirely blank canvases. Hebborn began to study old papers, and frequented a junk and antique shop near Leicester Square, where Eric befriended one of the owners. In organising the prints catalogued in the shop Hebborn began to understand more about paper, and its history and uses in art. It was on some of these blank, but old, pieces of paper that Eric made his first forgeries.

His first true forgeries were pencil drawings after Augustus John and several of these were sold to Hebborn's landlord in lieu of rents, some to Bond Street galleries and more through the major auction houses. Hebborn extended his repertoire to include Corot, Castiglione, Mantegna, Van Dyck, Poussin, Tiepolo, Rubens, Breughel and Piranesi. Some of his works were authenticated by leading art historians such as Sir John Pope Hennessy and Hebborn, who by now had settled in Rome, struck up a frequent trading relationship with Colnaghi's, an important gallery in London.

By 1978, suspicions were starting to form at Colnaghi, and a group[ of works that had been purchased from Hebborn were assembled and studied by a curator at the National Gallery of Art in Washington DC, Konrad Oberhuber. Oberhuber noticed that two drawings from diffent countries and periods had been executed on the same kind of paper. The game was up and Colnaghi recalled many of the drawings that they had sold over the past 15 years. Many had been sold to institutions: the Morgan Library for example had a fake Cossa, and the Statens Museum for Kunst in Copenhagen, a fake Piranesi. Colnaghi waited a full eighteen months before revealing the deception to the media, even then never mentioning Hebborn's name for fear of a libel suit, and quietly issued refunds to those who wanted them and didn't mind looking foolish. Needless to say, few wanted such publicity. Because of this failure to act, Hebborn continued to create his forgeries, manufacturing at least 500 more drawings between 1978 and 1988.

In 1984 Hebborn confessed to the forgeries —and rode the wave of press interest arrogantly, attacking the art world, critics and art dealers. In his autobiography Drawn to Trouble (1991), Hebborn boasted of how easily he had fooled art experts and how eager the dealers were to declare his works authentic to maximise their profits. He taunted the experts by declaring that many of his works were included in important collections, yet to be unmasked.

In 1993, Julian Hartnoll exhibited Eric Hebborn's own drawing in an exhibition in St. James's, to round criticism from the art establishment. In 1994, Archeus Fine Art went one better, by holding an exhibition of 15 "recently discovered 'Old Master Drawings'" by Hebborn, entitled The Difficulties of Attribution.

On 8 January 1996, shortly after the publication of the Italian edition of his book The Art Forger's Handbook, Eric Hebborn was found dying in a street in Rome.