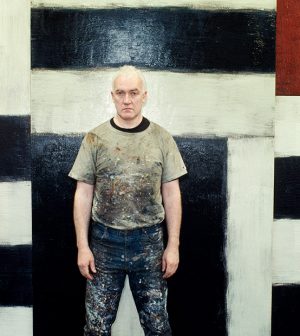 Sean Scully is an Irish painter living and working in New York City, Barcelona, and Munich, where he was a professor at the Academy of Fine Arts.

He has exhibited widely in Europe and the United States, and is represented in the permanent collections of a number of museums and public galleries, including the Metropolitan Museum of Art, the Museum of Modern Art, the Guggenheim Museum, the Tate Gallery, London, and the Irish Museum of Modern Art. A special extension to the Hugh Lane Gallery in Dublin houses eight of his paintings.

After an initial period of hard-edge abstract painting, which the artist considers incredibly important, Scully's work softened. Following a trip to Mexico in 1983, where he was deeply affected by the sight of Mayan and Aztec ruins, he began creating richly surfaced geometric interplays of rectangles and squares, known as Wall or Wall of Light paintings. Considered the creator of some of the most beautiful abstract paintings of his generation, Scully has twice been nominated for the Turner Prize.