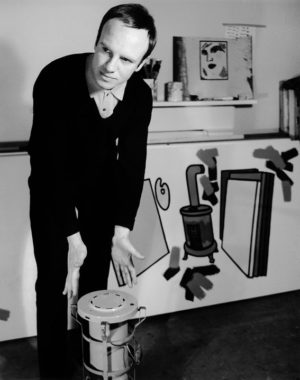 Patrick Caulfield was a painter and printmaker who lived and worked in London. He was best known for his vivid works in which areas of plain colour were surrounded by dark outlines to dramatic effect. Caulfield studied at the Chelsea School of Art from 1956 to 1960, and at the Royal College of Art from 1960 to 1963, during the glory years when his fellow pupils included David Hockney and Allen Jones. He exhibited at the New Generation show at London's Whitechapel Gallery, which resulted in him being associated with the pop art movement. Like many of his contemporaries however, he resented this label and remained opposed to it throughout his career.

In 1987, Caulfield was nominated for the Turner Prize and in 1993 was awarded the Jerwood Painting Prize. He has twice been given solo shows at the Tate Gallery, in London and Liverpool, and a third will happen at Tate Britain in 2013. In 1992-93 he was given a retrospective show at London's Serpentine Gallery. Caulfield died in London in 2005.

Caulfield's work can be seen in the permanent collections of the following institutions: