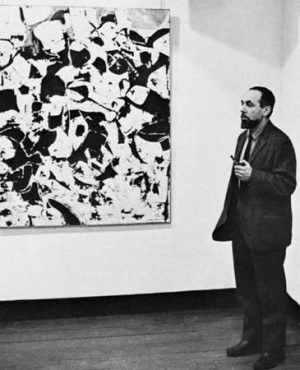 Although Conrad Marca-Relli began his artistic career as a painter, he is recognized as one of the American masters of collage and part of the first generation of abstract expressionism. Self-taught, except for a brief stint at Cooper Union in New York City, he has exhibited often in New York City, Europe and Latin America.

Marca-Relli was born in Boston of Italian parents. From 1935 to 1938, he worked for the WPA Federal Art Project. He spent four years in the army before settling in New York City. Although he traveled in Europe, the United States and Mexico, his frequent trips to Italy had the greatest effect on his early paintings.

Marca-Relli's early cityscapes, still lifes, circus themes and architectural motifs are reminiscent of Italian surrealist painter Giorgio de Chirico. The subdued palette and architectural starkness of these paintings create a sense of loneliness and emptiness typical of the surrealists.

His collage paintings of the early 1950s are characterized by abstract or suggested figures, reclining or seated. These early works of canvas and pigment were created by first sketching forms onto bare canvas; they were then cut out and pinned to a supporting canvas. The pinning allowed the positioning of the cut-outs, so that accident and chance mingled with the artist's initial ideas. Carefully structuring the collage elements, Marca-Relli employed intense colors, broken surfaces and expressionistic spattering.

In the 1960s, he experimented with metal and vinyl sheets for an industrial effect. Shapes were outlined with painted or actual nail holes, stressing their three-dimensional plasticity.

Over the years the collages developed an abstract simplicity, evidenced by black or somber colors and rectangular shapes isolated against a neutral backdrop.