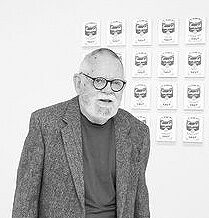 Richard Pettibone came to prominence in the late 1960s as a leading figure in the Appropriation art movement. His practice involves making painstakingly intricate miniatures of now well-known paintings and sculptures by the likes of Brancusi, Warhol, Lichtenstein, a practice to which he has devoted practically his entire career.

Notable for their assiduous craftsmanship and often with his own artistic interventions, the canvases are neatly tacked to wooden stretchers framed by thin wooden strips of the sort popular in the 1970s, his paintings are actually little sculptures. Favouring artists whose work already dealt with the themes of seriality, Pettibone’s reproductions inherently add a sense of irony, and even humour, to the original source material.

Pettibone uncannily anticipated which artists and works would rise to, and remain in, prominence. In this way his oeuvre serves as a decades long act of art criticism. In his more current work, Pettibone expands his approach by appropriating material from other sources, including book covers.

Pettibone’s skillful intermingling of Appropriation and Pop art, as well as elements of Conceptualism, garners consistent critical acclaim and has led to numerous prestigious exhibitions, including an immense career retrospective at the Laguna Art Museum in 2005. His work is included in the permanent collections of the Museum of Modern Art and the Whitney Museum of American Art, the Museum of Contemporary Art, Los Angeles and the Institute of Contemporary Art, Philadelphia. The artist continues to live and work in New York.